The SFRA Review is an open access journal published four times a year by the Science Fiction Research Association (SFRA) under a CC-BY-NC-ND 4.0 license.

Fragmentation, Coherence and Worldbuilding in Magic: The Gathering

Wizards of the Coast’s Magic: The Gathering is a popular Trading Card Game, or TCG, that offers a case study of a transmedia enterprise that extends the critical debate about worldbuilding (Pak). Magic’s development as a game and storyworld depends on the fragmentation and reconstitution of elements that are continually arranged and re-imagined to build coherent narratives in multiple worlds. TCGs are suited to transmedia extension and highlight issues related to narrative, the mechanics and culture of gameplay, and the multiple constituencies that Wizards seeks to engage.

Magic’s formal properties offer us ways to think through issues related to transmedia, play, and worldbuilding. Reflecting on Magic also raises fascinating parallels to meaning-making and engagement for other games and other forms of speculative fictions. I focus today on the expansion of Magic’s narrative elements in relation to play, along with the collaborations between players in constructing stories from fragmentary elements represented by the cards themselves. I consider Magic’s early development to reflect on the logic of its worldbuilding and some of its early narrative strategies but will show how these approaches are still relevant to how Magic works today vis-à-vis worldbuilding.

First, some background on what Magic is. Magic is a TCG created by Richard Garfield for the games publisher Wizards of the Coast. It was the first-ever TCG upon its release in 1993 and it prepared audiences and markets for the development of the TCG industry. The first core set, called Alpha, contained 295 cards; since 1993 well over a hundred core sets and expansions have been released, along with merchandise, novels, comics, digital games and platforms, and a wealth of fan-created content. Although Wizards has managed a long-standing professional competitive scene, this year that professional support has been withdrawn and the future of competitive play is uncertain. 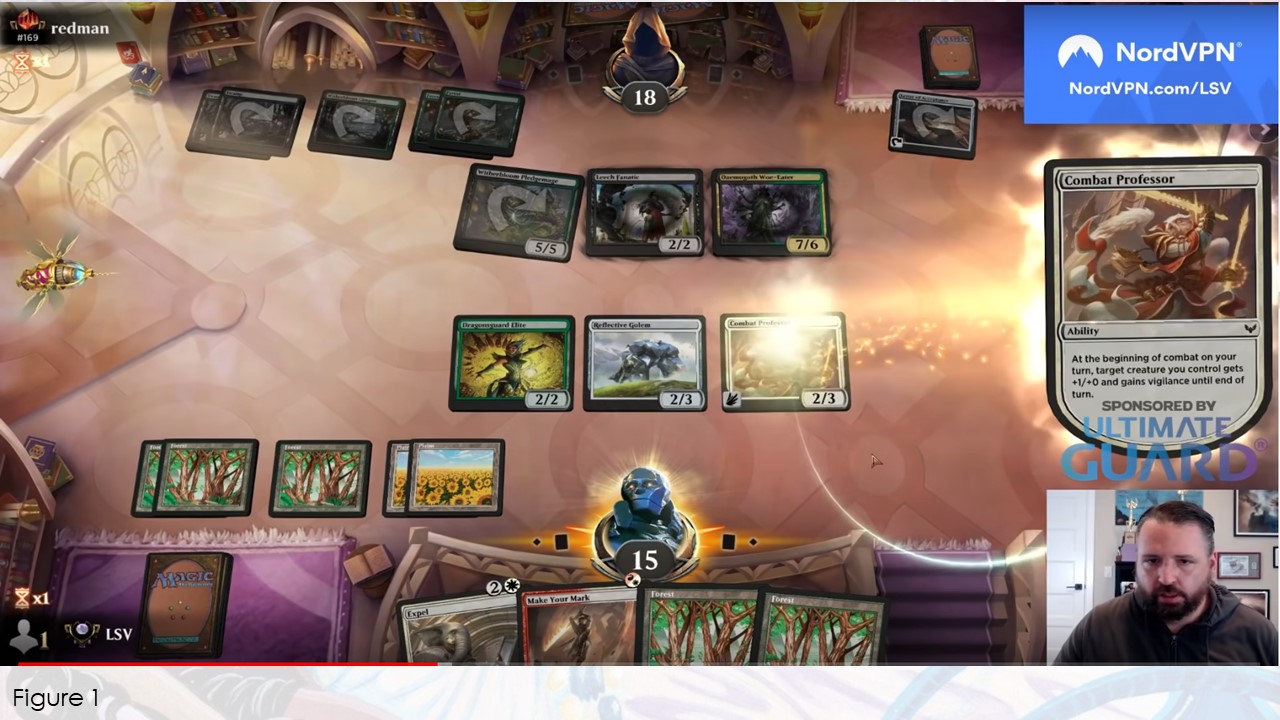 Magic can be played in a number of ways, with various formats using different rules and card pools drawn from the total archive of cards. Many professional and casual players stream their games, for example, a competitive player, Luis Scott-Vargas, whose Twitch chat has been known to host spontaneous fantasy book discussions and to a visiting Brandon Sanderson (Figure 1). What is important about this brief introduction is how Magic exists as a multi-format analog and digital enterprise with official and unofficial products, discussions, and gaming contexts organised around the core experience of play. As demonstrated in the clip, it’s typically played between two players, who nominally take turns accruing resources and establishing control over the play environment (ChannelFireball). At the start of the game players draw seven cards from a deck, known as the library, and then draw one card per turn. They are also able to exert control over space by playing one land per turn, and may “tap” these lands for mana to play a variety of spells—visually represented by turning cards ninety degrees to the right or left.

This is important for Magic’s worldbuilding: each of these elements invites meaning-making through narrative. Magic is a context-dependent play environment that draws on situated knowledge for narrative meaning-making. Deckbuilding is a form of worldbuilding, while gameplay is narrative. Meaning-making in relation to Magic’s approach to worldbuilding is based on juxtaposed elements within a rule-bound and thematically systematic frame. As Autumn M. Dodge argues in relation to literacy, Magic players able to interpret the sequence of meaning from this complex can build narratives during deck construction and gameplay (175). Explaining the rules of the game often relies on connecting game actions to the underlying assumptions of the Magic universe. Indeed, the library itself and the player’s hand take on functions in this world: there is a card called “Thoughtseize,” which enables a player to force another to discard a card of the caster’s choice (Figure 2).

Another card conceptualises the hand as a mind that is incrementally replenished each turn from the library. A third card, “Brainstorm,” enables a player to draw three cards and to place two from their hand back on top of their library (Figure 2). The hand is thus positioned as the player’s mind with the cards comprising thoughts or ideas. The library, as a source of knowledge, are thoughts that can be actualised through spellcasting. However, any given element might take on different aspects of the world, depending on play context. For example, the library itself is also temporal, given the “draw one” card a turn rule and the sequential arrangement of cards in the library. A card like “Approach of the Second Sun” involves replacing the card after it is cast seven cards below the first, thus drawing a relationship to time, as each turn passes the sun approaches (Figure 2). Thus the game’s mechanics encourage narrative meaning-making. 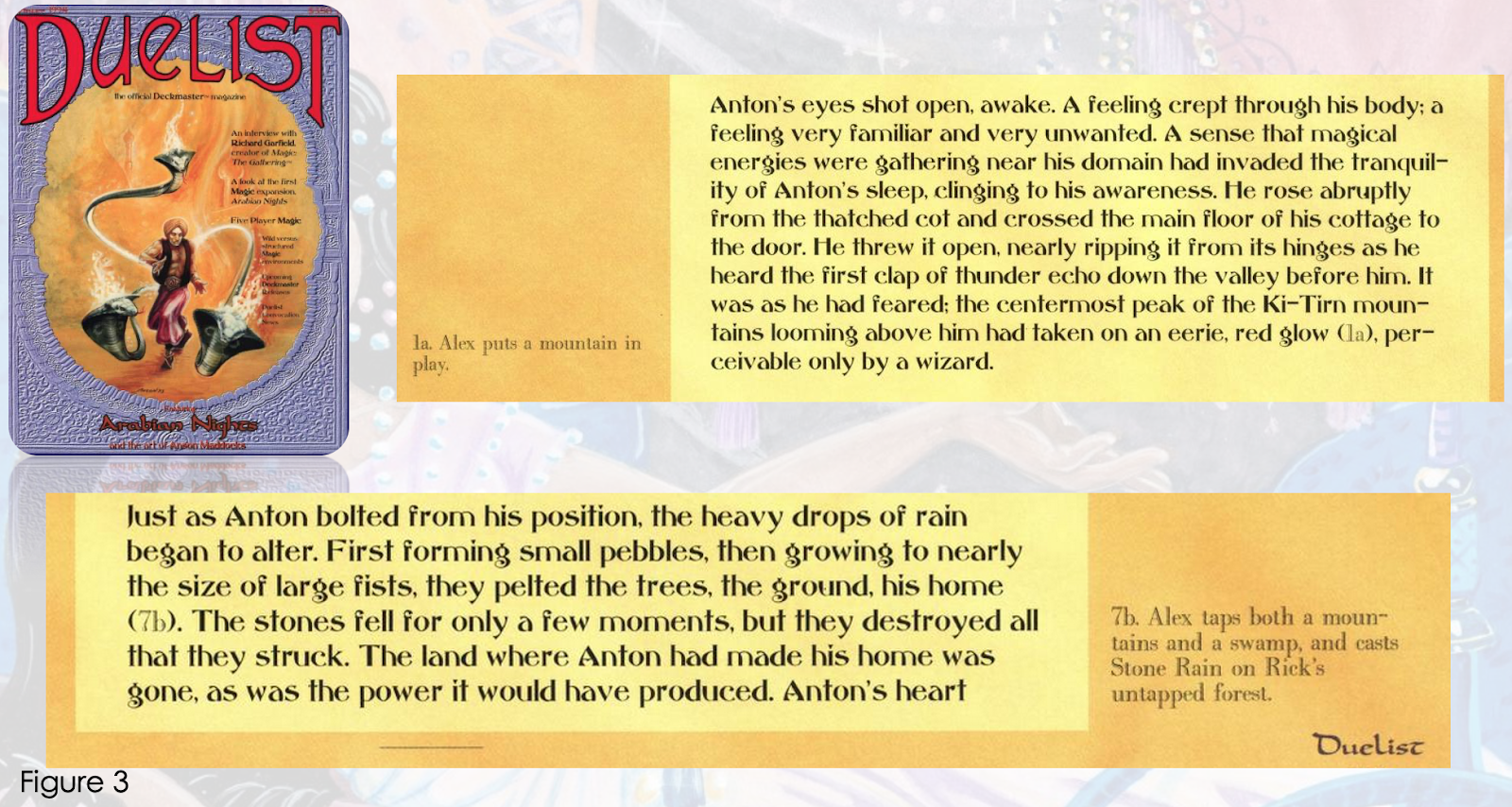 To emphasise what is going on, narratively speaking, in a game of Magic, I’d like to appeal to an article in the first issue of the magazine Duelist, a long-defunct publication produced by Wizards early in Magic’s history (Figure 3). This article, “Duel for Dominia,” written in 1994 by the head of the Duelists’ Convocation—the body that oversaw competitive play—narrativises a competitive game of Magic (Bishop 42–45). This story is imagined by a spectator who is positioned to engage in official, though unplanned, experiments in worldbuilding. In the story are references to the sequence of plays made by two players in the final round of the 1993 GenCon tournament. Each of the players is assigned a persona and each of their discrete plays is re-imagined as moves in a struggle for dominance over the plane now known as Dominaria, then called Dominia. There are footnotes in the narrative that direct you to each of those discrete plays, detailed in the margins. The most basic of game actions—playing a land card—is an opportunity to set the scene: to construct a landscape upon which this duel plays out. A sorcery is played: “Stone Rain,” which destroys a land, imagined in the story as unfolding amidst the character-players’ dramatic reactions in the storyworld. From its early development gameplay was imagined as a story-building endeavour that called on players to engage in their own imaginative acts of worldbuilding. Indeed, more contemporaneously, one player on Reddit evidences just this kind of storytelling but complains of how some of the more recondite strategies inhibit their ability to do so (Anon “My Need for Storytelling”) (Figure 4). A respondent offers a narrative to help make sense of the game actions being undertaken, which points to how these narratives are discussed, reflected upon and shared within the various Magic communities to make coherent the fragments that are juxtaposed within any given deck and gameplay sequence. 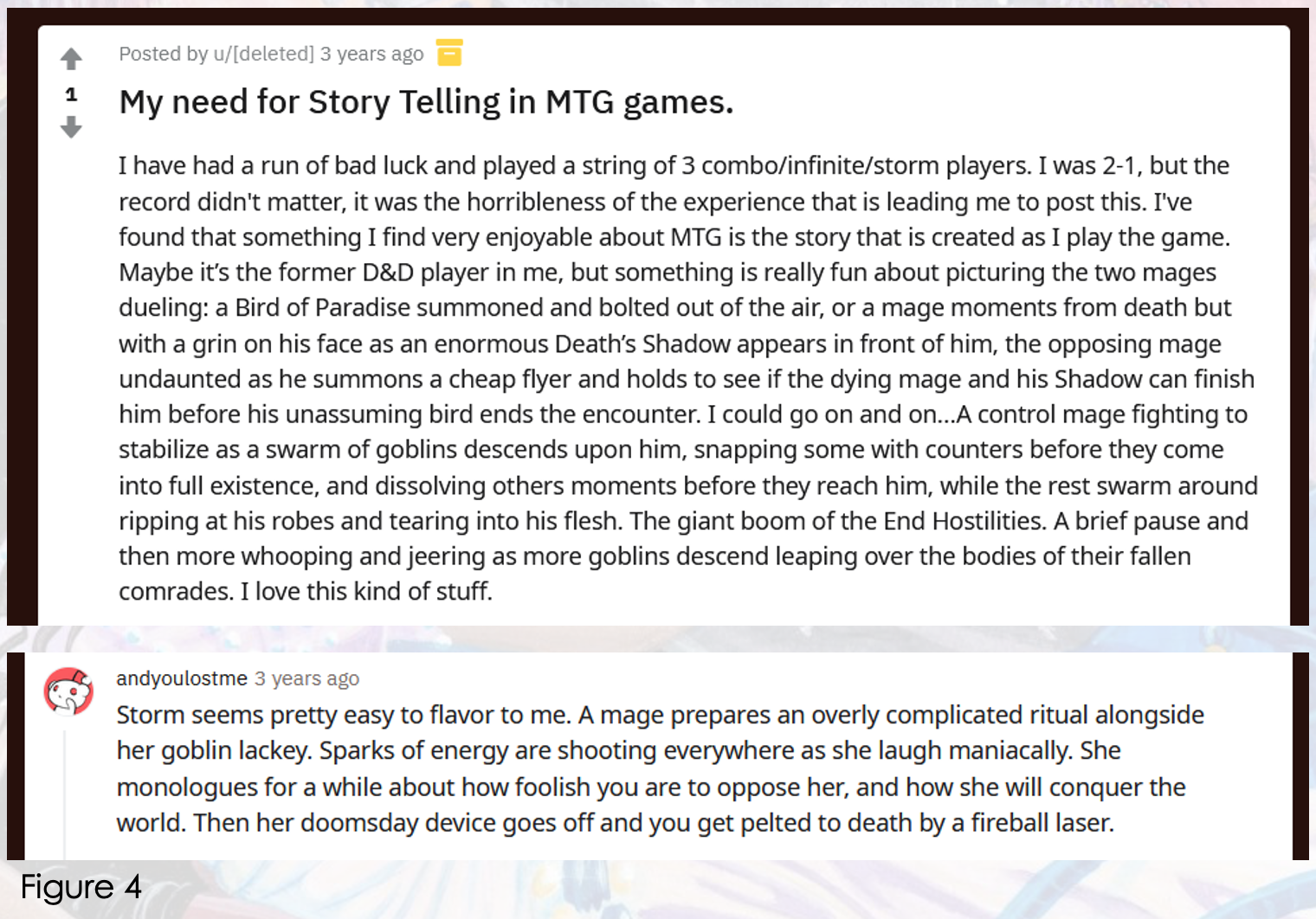 This storytelling property is informed by fantasy narratives and roleplaying, in particular Dungeons & Dragons, which Garfield cites as one of several sources for the game’s development in the same issue of Duelist (8). GenCon attendees and D&D players were some of the target audiences for the game. Wizards would go on to acquire the role-playing game company known for publishing Dungeons & Dragons, Tactical Studies Rules (TSR) in 1997. The eagerly awaited though ultimately disappointing expansion of Magic called Dungeons & Dragons: Adventures in the Forgotten Realms, was released on July 23, 2021, and brings this connection full-circle (Figure 5). So Magic, while it engages in worldbuilding for its own unique worlds, also invites imaginative play in other worlds. Magic’s fragmentary nature, then, offers intertextual connections and transmedial extension across worlds as much as it remediates other gaming forms. This kind of worldbuilding from fragments represented by cards is intimately tied to stories and to literature. The allusion to D&D has precedents, which I’d like to end the discussion with because it offers a useful metaphor for Magic’s narrative and worldbuilding. Magic’s first expansion—as distinct from a core set—remediated the One Thousand and One Nights. The expansion, Arabian Nights, also released in 1993, included cards such as “Aladdin,” “Shahrazad,” “Bazaar of Baghdad,” and “Library of Alexandria” (Figure 6). An article in the first issue of Duelist, written by Magic head and editor Beverly Marshall-Saling, provides an account of the history of the One Thousand and One Nights to scaffold this imaginative habitation of another world (4–5). Garfield writes in the same issue that not only Arabian Nights but also Neil Gaiman’s The Sandman inspired the development of the first Magic expansion (6). Framing Magic as a game but also as a collection of gaming environments that implies a sequence of games, each with its own story to tell, aligns with Shahrazad’s storytelling endeavour and positions this literary figure as Magic’s spiritual hero and a model for transmedia worldbuilding and storytelling. The card itself—banned in all official formats—demands that players suspend their current game to play a game-within-a-game with their remaining resources before returning to the original game—an apt figure, then, for the multiplication of stories and games.

Magic is a series of different games and stories reconstituted from fragments and from players’ and spectators’ creative labour, all of which are scaffolded by worlds that are established through the cards and its associated media. Magic exemplifies a transmedia enterprise that is negotiating aspects of Jenkins, Ford, and Green’s conceptualisation of spreadable media as sticky (4). Worldbuilding in Magic is a collaborative process involving critique, compromise and negotiation between designers, players, writers, artists, and others, whose interactions and claims of ownership contribute to Magic worldbuilding. I have only been able to discuss Magic’s narrative potential in broad terms, but there is a wealth of fan-generated critique and extension of these worlds.

Chris Pak cast his first spell in 1994. He is a lecturer in Contemporary Writing and Digital Cultures at Swansea University. His research has focussed on terraforming, human-animal relationships, and the Digital Humanities. More information can be found on his website at https://chrispak.wixsite.com/chrispak.

SFRA Review is the flagship publication of the Science Fiction Research Association since 1971. View all posts by sfrarev